Trusting, Even When Things Don’t Work Out 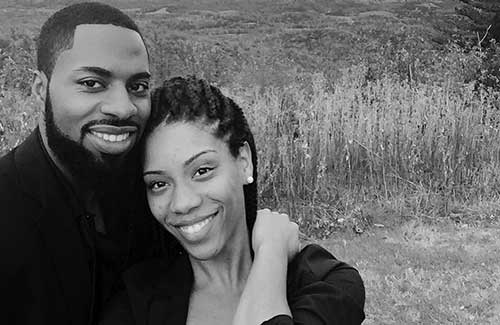 After we had our baby girl, Erin, we always talked about trying again for another baby when she turned 3. This August, Erin will be three, so earlier this year we found out we were going to be family of four in October. We found out our news right before my husband, Solomon, had to start leaving during the week to work out of town for two months. The thought of having another baby would be a great distraction while he was gone.
Before he left, we decided to tell our parents, and of course they were thrilled. I even decided to share the news with my co-workers, and one of them asked if I was nervous announcing our pregnancy so early. I confidently responded, “Whatever is supposed to happen will happen!”

Before Solomon left for his first week out of town, he kept asking me if I was ready to share on social media yet. I could tell he was excited, and probably eager knowing he would be away from us for a time. I was hesitant. I did not feel anything physically wrong with me, I was only having early pregnancy symptoms, but for some reason, I kept feeling like something would be different this time. I kept asking him to wait posting on social media until my first doctor’s appointment. After the first week being away, when he got home,

Solomon once again asked to post our news on social media, and I willingly agreed. We were so excited.
The day of my first appointment, I went to the doctor, but still felt like something was going to be different with this pregnancy. As soon as the ultrasound tech touched my belly with the wand and I could see the screen, I knew that something was wrong. There was nothing that looked like a baby showing up, or anything at all for that matter. The tech never said a word, and told me the doctor would discuss the ultrasound with me.

When I went into the room to see the doctor, the nurse asked me if I had any abnormal symptoms, and then let me know that the doctor would be a while because they had a patient in labor. As I waited, I prayed that God would prepare my heart for whatever I was about to hear. I dozed off to sleep, because of work, being pregnant, and taking care of a toddler, I was exhausted. The doctor came in and got right to the point. There was no pregnancy sac showing, no sign of a baby. She explained that it could be one of two things, the weeks were off, and we just couldn’t see anything yet, or that I had miscarried. My heart sank to the floor hearing that word. She told me to come back in three weeks for another ultrasound.

I kept my composure until I got in the car, and then I cried and wept. I called Solomon and told him everything. He was very sweet and comforting even though he was hurt too. I took the next day off, dreading having to tell my coworkers. The next week was so hard. I found myself randomly crying, overwhelmed, exhausted, and alone. Although I have supportive parents, I missed my husband, and I was still having pregnancy symptoms. By the second week, I got on my knees and asked God for His strength. I cried out to Him, read the Word, and spent time with Him. I forced myself to sit at His feet. After giving all of my pain to God, I felt strengthened, and I made up my mind that I was going to believe God for a God story. I specifically prayed and wrote in my journal, for a healthy baby, and healthy heartbeat to show up at the next appointment.

Solomon was able to come with me to the next appointment. I asked him to wear his Christian Life Group shirt so that we could have something representing our faith. Something that would help us remember the moment when God gave us our God story. I was so excited…but the appointment did not go well. There was still no baby. We sat in the parking lot for a long time heartbroken. What had happened to our God story? During the days that followed, I felt sad, but I also felt an unexplainable peace and joy and closeness to God. I felt like a little baby wrapped in the comforting arms of my Father. Through the tears, all I could think of was God’s strength and might, and how He was in total control.

When it was time to tell Erin, I explained to her that God took the baby back. She later told Solomon, “Daddy, the baby is not in mommy’s tummy anymore. God took it back. He took it for work!” Huh? He took it for work? I hadn’t told her that. When I asked Erin about it, she never answered. And then I knew. God had been WORKING in me. All that I was experiencing was His work. We get so wrapped up in day to day tasks, and try to take care of thing in our own strength. This experience was a reminder that He is the author of our lives; He is mighty; He is the God of Perfect Peace during the worst of storms…That was HIS work.
Since we had shared our news on social media, we felt that we needed to finish the story. We shared how the experience had strengthened our marriage and our walk with Christ. We explained that we had to cling to the Savior and humble our hearts like never before.

Through the past few months, I’ve experienced a trust in Him that I never had before, a trust I know he also desires of me…. I have known the peace that passes all understanding in the midst of heartbreak. Others have been touched by our situation, and we have challenged them to cling to God. And that ….is our God story.