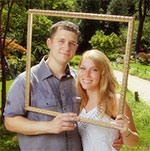 I wanted to share a recent God Story in my life. I’ve been listening to the messages from the past few weeks at church and I kept hearing about how God was making provisions for those who were willing to sacrifice something for His glory.

I heard about Becca giving up soccer and so forth and I began to think, is my job, which causes me to miss 7/8 Church Services and every major holiday including Christmas really worth it? I admittedly got scared because the job pays well and I didn’t want my family to suffer for my decision, but I also felt like I needed to make a change. After talking with my wife we both agreed it was the right move.

The next day my wife and I went to a car dealership to shop for a new car. I got into a conversation with the General Manager of the store, and this conversation eventually led to him asking if I was interested in selling cars. He enjoyed my knowledge of newer vehicles and said I was a very personable person. So, not even a full 24 hours had passed since my decision to leave my current job and I was already being offered employment elsewhere. Obviously I was a bit scared and when I asked what the schedule was going to be like, he told me I would be working long hours and every other Sunday. I found myself thinking, Well, 4/8 Sundays isn’t as bad as 7/8, but it’s still not great. It wasn’t until we were walking out of the dealership that I happened to glance down and look at the store hours on Sundays. They were open from Noon-6pm, which meant that even when I did work I would be able to attend the 9 o’clock service and I would have time for my family as well. I filled out the application and 3 days later I was offered employment.

God showed me He truly cares and blesses those of us willing to sacrifice for Him and trust in his Grace and provisions!