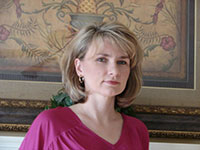 I would like to share how God recently did a miracle for me. One Sunday, on my way home from church, I had a very sharp pain on my right side. I told my husband that I just needed to lay down but the pain kept getting worse. By the time we got home, I couldn’t stand straight. I tried walking into the house, but the pain was so bad that I just humped over on the ground. Robb rushed me to the ER.

To give you an idea of the pain, I don’t remember much about the ride to the hospital or being checked in. The right side of my body starting going numb, when I tried to look up at people, everything was blurry. On a scale of 1-10, I rated the pain a 15!! The doctors thought, based on my symptoms, that I had kidney stones. I had a CAT scan, hoping to see exactly where the stones were lodged. Robb and I waited and waited and finally the doctor came in asking if I was certain that I had my uterus removed (which I had removed two years ago). We explained to him that YES, I had my uterus removed. We could tell by the look on his face that he was concerned. We waited awhile longer, the doctor returned, explaining to us that I had a large mass in my abdomen. What do you think of when you hear the word ”mass”…exactly…that’s what I thought. I was hit with confusion and fear! The doctor wanted me to have more test done.

While I was waiting for more tests, my husband had contacted Pastor Dennis and friends to pray. I prayed, I cried out to God for His peace and to touch my body. Robb and I asked everyone to agree with us, that when we had the test done, that the mass would be completely gone. Let me back up for just a minute, that morning at church, a few people prayed over me at the altar. Pastor Dennis had said to me, in part, that God was touching me and that everything was going to be okay with me. Also, in God’s word, He says that ”by the stripes of Jesus, I AM healed.” His word says that “when two or more agree about any matter, it shall be done for them.” I layed in the bed, thinking of these scriptures and what Pastor Dennis had prayed over me. Two dear friends visited me in the hospital room and prayed over me and we asked God to heal my body and remove the mass. I had more test done, and the mass was GONE!!! The doctors ran more test…still gone!!! It was amazing! I went from thinking I had kidney stones, to being prepared for possible surgery and who knows what else, to going home completely free from any mass. I praise God for what He did for me and my family.