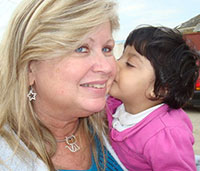 Tuesday was suppose to be a day like any other day; run errands, a doctors appointment, a mammogram, fix dinner and then go to bed. But it did not go the way I planned. I arrived at the breast center for my 3 year late mammogram at 2:45. I hate those things. My technician finished my mammogram and told me to wait in the tiny waiting area in the back. I felt that this was odd because I was the only one with a top drape still on. I thought, this wasn’t good. The doctor came back and said there was a suspicious area they wanted to do a sonogram on and to follow the other nice lady.

The next thing I knew they let me dress and I sat alone with the doctor while he showed me my slides. The doctor looked at me sternly and said “We’re not sure what’s going on and I won’t twist your arm but you either need to come back in 3 months or get a biopsy now. I feel very strongly about this but I won’t force you.” I thought, let’s do this and get it over with. Why worry 3 months? It starting feeling like a blur. Immediately after hearing the news of a biopsy, I contacted people that I knew would stand in faith with me and not talk negative. We had the church prayer team pray.

My mother had something to do the next day and could not take me to my appointment and Terry could only meet me there at 8:00 a.m. I only had 14 hours to plan and had no idea who to call. JoAnne who I consider as a second mom and who has survived breast cancer was in northern Virginia with her daughter and It was just going to be me and Jesus in that car going to my appointment. To say that I was frightened was putting it mildly. I had to drive alone 45 minutes to get there and drive myself home.

I arrived at my appointment and they did a stereotactic biopsy taking 6 tissue samples. They numbed me well and I didn’t feel any pain. Thankfully the medication in higher doses is an amnesiac, so I don’t remember a lot. You can’t know fear like this until you have experienced it. I wish I could say I was at perfect peace and heard angels singing, but things don’t always work that way.

I am thankful to only remember a few things about the procedure. I laid there crying and scared. Being alone in a situation like that is about more than I can handle, but I was not really alone. I know Jesus was there. I then remember meeting Terry in the doctor’s office and seeing what the slides looked like and I was told that the report would be back the next day. I drove myself home and went to sleep.

I was very grateful for a no cancer diagnosis the next afternoon. The report read benign breast parenchyma with apocrine cysts and to follow up in 6 months. I KNOW God answered that prayer. The doctor wasn’t even expecting this report. In fact, after receiving it, he called the pathologist and asked him how sure was he that it was cancer free and the pathologist said 100%! We serve a healing God!

The LORD has heard my plea; the LORD will answer my prayer. Psalm 6:9