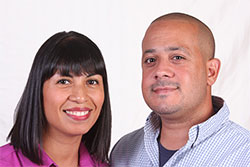 While I was pregnant with Jade, the enemy was hard at work. I knew there was a God, but I didn’t know what it was like to have a relationship with Him. Despite that, He has ALWAYS been there for me. Angel and I were going through a really tough time, and I found myself physically sick and pregnant. I had anemia and kidney stones. I was on depression medication and the doctors who were treating me STRONGLY recommended that I would terminate my pregnancy because my baby had a strong chance of being born severely handicapped IF she lived longer than one week because of her medical condition in my womb.

My depression was so deep, I was actually suicidal. I found myself with ridiculous thoughts every day, and didn’t feel that it would really matter if I was around or not. I loved my girls, but my loneliness and thoughts were so far off, I couldn’t take any more of the pressures. Despite their “recommendations”, I didn’t terminate the pregnancy.
The lady who used to babysit Kayla for me was a Christian. She would always tell me I needed God, but I would just say “yes” to her so that she would stop talking and I could just pick up Kayla and leave. Not too much later, I had my first encounter with God and it has taken me years to realize this. We had gone to our first Christian church service, with NO intention on hearing the Word or having anything to do with ‘religion’. We were simply seeking somewhere warm to sit and kill time. But God had other plans. We were short on cash, food and medication for Kayla who we had just checked out of the hospital after having an asthma attack. When they were passing the bucket around for the offering, we were given an envelope and the usher walked away. Angel and I looked at each other knowing we didn’t have anything to put in. The envelope felt heavy, and when I opened it, it had money inside already. I may not have had a relationship with God then, but I knew I was not going to take something that wasn’t mine. So I followed the usher to the front of the church (not paying attention to what was going on around me, or even understanding). He saw me and asked me what was wrong and I explained I had received this envelope with money in it that was not mine. He then asked me WHY did I not think it was mine? Confused, I said “because I didn’t put the money in it”. He looked at me and said, “that is for you” and walked away. There was exactly enough money in there to get Kayla’s medicine, food and gas. Next thing I knew, as I was standing there in shock, I looked behind me and Angel was at the altar with me and the girls. The Pastor walked up to me and started praying over me. He told me that the enemy did not want Jade to be born because she was going to be the glue that united our family again.

No one there knew us, our situation, or the things I had gone through in this pregnancy. In my 8th month of pregnancy, I asked God into my heart, after watching my first TV sermon! The time came for Jade to be born. As I was delivering, the cord was wrapped around her neck, and she was blue. Within a few minutes she started to cry and was born healthy and whole! It took a little while, but our family was restored. When Jade started to form her sentences, she would talk to me about Jesus, and tell me that she was in heaven with Him and that He would point us out to her and tell her that He was sending her to us! It is something I will never forget! God is so amazing! It brings so many scriptures to mind, his provision, his healing, and how He knew us even before we were born.

For you created my inmost being; you knit me together in my mother’s womb. I praise you because I am fearfully and wonderfully made; your works are wonderful, I know that full well. Psalm 139:13-14