Grandpa Gives His Life to Jesus 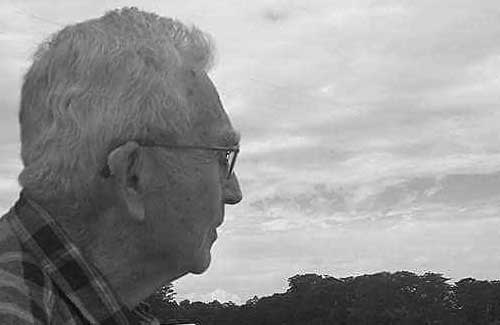 My grandparents were married for sixty-two years.My grandmother served the Lord her whole life. My grandfather was a good man, but had his own opinions about church and faith, and often these were things he preferred not to discuss.

In April of 2017, the doctors told us that Grandpa had angiosarcoma, an aggressive and rare form of cancer. They said that it was going to be aggressive, and that there weren’t really any treatments for it. The timeframe that they gave us was their best guess of six months. My anxiety kicked into overdrive. Six months? How, after 32 years of my life, could I only have my grandpa left for 6 more months? What about his salvation? He had never responded well when we’d brought it up over the years, he really didn’t like discussing it. I began to pray to God, constantly begging Him to give me the courage and strength to witness to my grandpa, all the while worried that Grandpa would reject Him and resent me for bringing it up. I felt as if God’s urgency didn’t match mine. It felt like He was saying “Don’t worry so much. Everything is going to be alright.” But it wasn’t going to be alright, was it? Because if Grandpa didn’t know Jesus before he died then he would not be spending eternity with the Lord. I could not bear the thought of Grandpa not being in heaven. I pleaded with and begged Jesus to help me get over my fear and to give me the opportunity to talk to Grandpa about Jesus.I would say, “God, you don’t understand. This guy is stubborn, he’s like a mountain, no one can move him. I can’t do this on my own, I need your help!” And still, God kept saying “It’s going to be alright.”

On my birthday, September 19th, my mom pulled me into the kitchen and said the diagnosis had changed. He has three months, if he’s lucky. I spent the next day in a haze. The next night, as I was lying in bed, my mom called me and I answered, “I can’t handle any more bad news, Mom. Whatever it is, it has to wait.”

“Grandpa has been saved,” she said.

“What?” “Grandpa asked Jesus into his heart…”

My grandpa always has been an early riser. He gets up at four or five, goes into the den, and turns on the TV. The only thing he ever watches is the news or old westerns on Turner Classic Movies, but this one particular morning, Dr. Charles Stanley’s program was on TV. Despite my grandpa’s feelings about church, he watched this program. The following Sunday, he got up and watched it again. Unknown to us, he had been doing this for a while, and one day when Dr. Stanley gave an invitation, my grandpa asked God into his heart.

I laid in my bed sobbing, simultaneously thrilled for my grandpa’s salvation, the answer to all of our prayers, and ashamed that I had not had the courage to talk to him about Jesus. In that moment, as I prayed to thank God and ask forgiveness for my lack of courage, He said to me “I told you it was going to be alright! I don’t need you to make a way, I AM the way! I don’t care if your grandpa is a stubborn mountain! I don’t need to go over or around that mountain, I’ll go THROUGH to the heart of that mountain! I can MOVE the mountain if I want to!”

The Saturday of Thanksgiving weekend, mom called and said “You need to come now.” I dropped everything and rushed out to my grandparent’s home to be by Grandpa’s side. There, he was surrounded by family; we hugged him and loved on him and told him how much he meant to us. I sat with his hand in mine, and I felt a sense of utter peace and joy surround us. It felt like he’d be leaving soon. We played music and sang to him, of particular note was a song I had not heard before called “Come to Jesus” by Chris Rice. As I listened, we talked to Grandpa and told him it was ok to go, go and be healed, go and suffer no longer, go and be reunited with your mama, go and wait for us, because we wouldn’t be long behind.

The next song was the Alan Jackson version of “Amazing Grace”. During the last verse Grandpa’s breathing stopped; I laid my head on his chest and listened to his heart flutter, and I stayed that way until he was gone. My grandpa had flown away to Jesus to be healed, to no longer struggle for the words he wanted to say, to no longer be unsure of his footing or the thoughts in his head, to no longer labor to breathe or shift his body to find a comfortable spot in the bed.