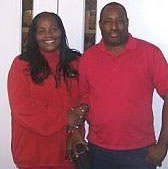 God is good! Willie and I were on our way to Long Island City, New York to deliver a load. While driving on I-95 going the speed limit of 65mph, a tractor trailer came over into our lane and Willie tried to slow down and blew the horn. Suddenly we were forced over to the guardrail and the truck and trailer jumped over it.

The whole truck and trailer landed on the guardrail. All the wheels were sitting steady on either side of the guardrail. We were 2-3 inches from tilting over and rolling down the hill.

I was in such a panic state while Willie controlled the wheel so we would not fall down the hill. I screamed, “Oh My God” at least 30 times during the whole incident. I know God heard me and I truly believe he stopped the truck on the guardrail until help came.
Willie was only concerned with me being alright once he saw that the truck had stopped. He kept hugging me and saying thank God you are alright. I told him I don’t know why but I felt that the devil was trying to pull us down and God stepped in and stopped his plans! We are blessed! Neither one of us were hurt and I thank God.
God is our refuge and strength, a very present help in trouble. Psalm 46:1