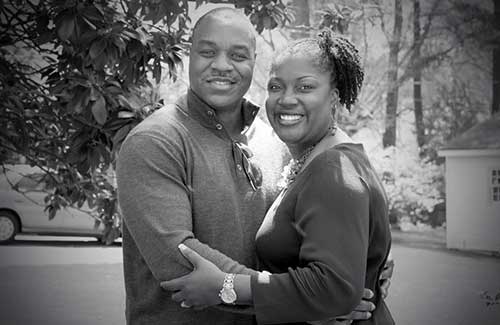 You have cancer … Who says that to a young 24 year old woman who just buried her sister 30 days before? Surely this isn’t real. The doctor squeezed my hand and waited for me to catch my breath. The look of fear settled on my face as unspoken questions raced through my mind. My favorite doctor stepped into my silence and immediately started answering questions that I didn’t trust my words to utter.

“We caught it in time. You are going to fine but we need to schedule this surgery as soon as possible if you want to get married and have kids one day.”

I collected myself and tried to figure out how I was going to tell my parents this news when their hearts were already so broken over the tragic death of my sister. My mother maintained her stance as an unwavering prayer warrior. My father confessed nothing but the word of God. I leaned on their faith when I couldn’t find mine. We scheduled the surgery and believed that everything would be fine ….

After a month of recovery a friend talked me into a road trip that would change my life forever. Two hours later, I laid eyes on the nicest man I had ever met in my life. He was kind, patient, tall and handsome. I was completely smitten. His name was Frank Battle.

Six months into this amazing courtship my favorite Doctor rendered the devastating blow of my second diagnosis. The cancer was back and the damage she suspected needed specialized care. We cried together and she referred me to a specialist who would recommend next steps and develop my treatment plan. I scheduled the appointment and was surprised when both Frank and my father said they would go with me to see the specialist. Together we listened to complex medical jargon and viewed ultra sound pictures that screamed endometriosis, cervical damage and infertility. Once he stopped to catch his breath my father asked outright, “Sir what exactly are you trying to tell us. What does all of this mean?”

The doctor seems annoyed. He blew out a long breath and said, “Sheila will l survive this but she won’t be able to have kids. If by some stroke of luck she happens to conceive, which I highly doubt, she will never carry a child to term. I recommend a full hysterectomy to save her the heartache and the possibility of a future occurrence of this cancer. We need to schedule the surgery now. I’m available next week. See the nurse on your way out to set up a pre-op appointment …. Blah, blah, blah ” I don’t remember much else that happened that day. I do remember that my family and I agreed that I would not have a hysterectomy. We would schedule the surgery and trust God with the results.

After the surgery the doctor arrogantly told of his skillful removal of tissue, tumors and the scrapping of cells. He also confirmed the damage he suspected and reminded my family that we should have heeded his council regarding the hysterectomy. He told my father he would surely see us again in a year or two when the problem returned. Frank and my parents refused to accept or confess this as truth.

Once the treatment plan was underway all I could think about was how do I get rid of this man!! He doesn’t deserve any of this and he should be with someone who can give him a family. When I told him so, his faith spoke louder than my fears. He told me that I could never get rid of him, that one day I would be his wife, and that I would bear his child. His unwavering confession of faith planted a seed of hope in my heart that was watered by prayer, prophecy and a promise that God would open my womb just like Hannah. So we stood on His word together and believed God for total healing. Our families kept praying, believing God along with us and after a while that seed of hope turned into a tree of life … And I was about to experience the miracle of it’s fruit.

After celebrating my birthday in 2000 it was time for another appointment with my favorite doctor. When the exam was over I got up to get dressed but the nurse came in and asked me not to leave. There was no panic in her voice and there seemed to be a mischievous grin on her face. The minutes ticked by slowly as I waited. I could hear foot steps running back and forth, even laughter coming from down the hall. The door opened and my doctor stood before me with tears in her eyes. I held my breath. In each hand she held a positive pregnancy test and two nurses stood behind her also in tears.

How could this be?? Our families were elated. I was scared. The doctor said we needed to get past the first trimester and well into the second before we would be out of the woods. To offset my fears God assembled a covenant family who met at the Battle Station every week for prayer. In time prayer, prophecy and the promise prevailed and our daughter Trinity Renee was born in December of that same year. We were overjoyed, our story blessed many families and we were satisfied that God’s promise of healing was proven through her birth. Little did we know that God wasn’t finished with us yet.

A few years later, we were leaving a powerful service when one of the elders stopped us and said he had a word from the Lord for me. I trusted this man of God but I was not prepared for what came next. He told me that God was not finished with my womb. That the birth of Trinity was indeed a gift but not the fulfillment of the promise regarding my healing. The promise was that God would heal me completely and shut the mouth of the doctor. He told me that within the next 12 months I would be pregnant again and this time the doctor would have to admit that the first pregnancy was not a fluke. He would have to admit this was a miracle and that God had completely healed my womb. I wept. I couldn’t go through this again. I was satisfied with one child and did not want to challenge God or my body trying to make a point to anyone.

But our God is faithful and His word also came to pass just as it was spoken. Our second daughter Zayin Sharia was born in November of 2004. My favorite doctor shook her head in submission to the power of God and informed my surgeon of our second child. He conceded by sending a set of ultrasound pictures which were given to me. After reviewing the images again my favorite doctor confirmed that only God’s hand could have cupped this child in my womb especially after the complications we experienced prior to the final trimester.

Since the birth of our girls we post the results of my annual exam each year to honor the God who heals. When we look at our girls, we KNOW that God is a healer even in the midst of difficult situations. We know even when physical healing doesn’t happen, God can and will heal our hearts with peace, grace and strength to endure. That HE specializes in things that seem impossible when we put our trust in Him. Finally, we know we can move from fear to faith, when we go to Him in prayer and stand on His precious promises for our lives.