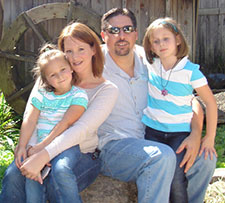 After a very successful year of employment and a home based business starting to get off the ground, we were suddenly faced with our first layoff in a very tumultuous economy.

No one was hiring regardless of CPA certification, remarkable references or even begging and pleading. We decided that since we were struggling to make ends meet, we would sell our home and downsize temporarily until things turned around. At least choosing to let it go was better than foreclosure. Thanksgiving weekend of ’09 our realtor told us we had a buyer but we had to be out in 2 weeks. We packed like our lives depended on it and thanks to our gracious parents, moved into their unused completely beautiful huge upstairs space. We allowed the new “owner” to move in because they were coming from out of state and let’s face it, we were desperate.

The Closing date was set for December 30th, but the day before close the buyers financing was not approved.  After spending almost $1000 for moving and storage and all the things that come with moving, especially over Christmas, not to mention transferring our child to a new elementary school mid-year, you’re going to tell me it’s not going to happen? We offered to lease our home with the intent to purchase after 18 months. All was right with the world. Our mortgage was being covered, that same week, Carlos got a new job, our daughter was thriving in her new school, our marriage was better than it had ever been, our family was close, in love with each other and in love with the Lord. Our girls thought they were on a permanent sleepover at Mimi and Papa’s house, oblivious to any financial stress in the household. Just as we prayed it would be for them.

One year later, another lay-off. Talk about trying not to lose heart, hope or faith at that point. It was a daily struggle, no moment by moment struggle, to encourage each other in the Lord or even in life, to remember God’s promises of provision, to remain faithful in the little when it felt like you had no control of the world that was crashing down around you. But that’s just it, it wasn’t in our control. It was in God’s hands! Why did we keep trying to shoulder a burden that wasn’t ours to bear? Cast your cares on the Lord and He will sustain you. It was during this time that we learned to rest in Him. We learned to trust Him as our provider…a good Father provides for His children and we truly began to know our Father God during this time.  July 2011, The 18 month lease of our home had come to a close and the tenant was not in a position to purchase, so we were going to have to move back in since it was no longer in condition to sell either. Unemployed, frustrated, with many renovations ahead of us, we moved back into our home, trusting God that he would make a way where there was none. For us it was the 12th hour. We fervently continued to pray for provision, praise Him, and thank Him for His enduring faithfulness.  September 2011 rolls around, school begins for the girls, and so did new jobs with the state for each of us. We didn’t even have to interview for them, they literally just dropped in our laps. We serve an on-time God. Granted, these positions were long-term temporary positions, but they were the source of provision when we needed it. We have never gone hungry, never had utilities turned off, never missed providing for our children, even for birthdays or Christmas, they knew no lack!!!

Two weeks ago, Carlos received a call from someone who he submitted his resume to 2 years ago. They wanted to hire him for a position that began immediately. This was entirely out of left field. We prayed about the offer, weighed the pros and cons, and he accepted the position. He went to speak to his supervisor with the state to explain the situation, and submit his resignation. Although feeling like he might be letting his team down, he really felt this is what God was directing him to do. Three days later, he was informed that several long-term temp positions with the state, including his entire section had been terminated. God made provision even before we knew it was needed. It wasn’t in the 12th hour, it was 3 days before the need was even known. What an awesome God we serve. FAITHFUL TO THE END!! HE IS GOOD!

And my God will liberally supply (fill to the full) your every need according to His riches in glory in Christ Jesus. Philippians 4:19